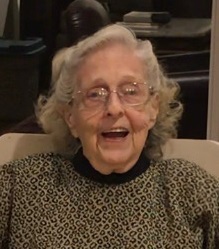 Mildred Elizabeth Murphy Overman passed away Friday, June 11, 2021 at her home surrounded by her loving family. She was born on Wednesday, December 6, 1922 at her grandparents’ home in Herkimer, NY. She was one of seven children born to the late Jeremiah “Jay” and Florence Fitch Murphy. Mildred grew up at the family homestead near Fairfield, where, in the early years, had a diesel generator and large batteries to run the milk cooler for their dairy farm and for a few lights in the house. Until the mid-40s commercial electricity was not available in the area where they lived.

Winter travel was mostly by sleigh since roads were not cleared of snow until early April. In fair weather children walked a few miles to a one-room schoolhouse where a single teacher taught students of all ages and where Mildred had completed all the studies they offered by the age of ten. She had some catching up to do, so, for the next four years she lived with her grandparents during the school year and attended St. Francis de Sales High School in Herkimer. There, she took high school classes and subjects that had not been available to her at country school. After four years she still lacked a few credits to graduate so she enrolled for a year at the newly centralized West Canada Valley Central School. Along with her brother Bud, she was part of WCV's first graduating class in 1939, the youngest in the class at the age of 16. Mildred loved her year at West Canada where she became a cheerleader, a member of the journalism club, and stayed in a hotel for the first time ever on the senior trip to New York City. She made many, many friends. Her friendship with Mildred Frank (Wood) lasted a lifetime but other good friends she often mentioned were Eileen Kelly, Betty Ann Ford, and Myra Olds.

After graduation Mildred lived with her Aunt Mary Murphy in Herkimer, taking the bus every morning to Little Falls to work at a shoe factory. She was saving money so she could study to be a dental hygienist at Eastman Dental Dispensary in Rochester, NY from which she graduated on June 2, 1942. She then moved to New York City where she lived with her Aunt Irene Fitch, taking flying lessons, working as a dental assistant and finally becoming a dental hygienist for the Army at Fort Dix in New Jersey. At Fort Dix she met Lt. E. Gerard Overman (Jerry) and they married on February 8, 1947. Their first two children, Rod and Kathy, were born in the late 1940s. In the mid-fifties they became parents to three sons: David, Jay and Tom. Sadly, twin girls, Maria and Susan, did not survive. Their youngest child, Beth, was born in the early 1960s.

In the years just after WW-II there was a huge demand for housing. They could not afford a single-family home, so they bought a small apartment house in New York City. It did not take Jerry and Mildred long to realize they were not meant to be landlords. After Jerry returned home from the Korean War, they moved to a small house on Broad Channel, an island in Jamaica Bay NY. At the time Jerry was working for Canteen Corporation, and they were transferred to Charlotte, NC in late 1955. After a few years Jerry started his own photography business there. When Beth was two Mildred started work at the Post Office where she stayed for 25 years, able to adapt her schedule to her family’s needs.

When Mildred’s sister, Edna, passed away in 1984 Mildred bought her Middleville home. There Mildred spent parts of many summers with family and friends. After her retirement in 1994 Mildred and Jerry enjoyed travel, especially to the Pacific Northwest and Puerto Rico as well as New York State where they had many relatives. Mildred’s favorite escape when the ‘world was too much for her’ was to her tiny cabin on The New River in the North Carolina mountains. There she was able to assert her claim to the shoreline by her cabin that had over the years been home to many beavers. Mildred’s persistence, DEQ approved traps, and tons of rip-rap finally did the trick and the beavers gave up and moved on.

Mildred never lost her curiosity about things around her and never gave up wanting to learn about something new or different. She was a tour guide’s delight, someone who heard his every word and wanted to understand. We often called her the ‘energizer bunny’. She wanted to get things done and was always on the move.

In addition to her parents, Mildred was preceded in death by her loving husband, Jerry, two sisters, four brothers, twin daughters Maria and Susan, grandson David, and son Jay.

She is survived by daughters: Kathy and Beth; sons: Rod and his wife, Hilde, David and his wife, Judy, and Tom and his wife, Mary Ellen; daughter-in-law: Marie, with whom she has lived with for the past several years; nine grandchildren, four great-grandchildren, two cousins, two sisters-in-law, countless nieces and nephews, and many more loving family and friends.

The family will receive friends from 6:00 p.m. until 8:00 p.m. Thursday, June 17, 2021 at Hankins and Whittington Funeral Service. A Funeral Mass will be held at 10:30 a.m. Friday, June 18, 2021 at St. Patrick’s Cathedral with Father Paul Gary officiating. Final interment will be held at Arlington National Cemetery beside her late husband, E.G. “Jerry” Overman at a later date.

In lieu of flowers please contribute to the Arbor Day Foundation (ArborDay.org) or Holy Angels in Belmont (HolyAngelsNC.org).

To send flowers to the family or plant a tree in memory of Mildred Overman, please visit Tribute Store
Print
Thursday
17
June