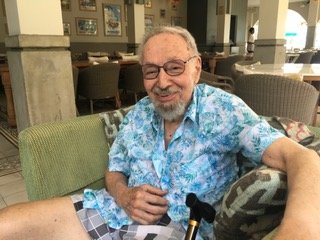 It is with deep sadness that the family of Arthur Bennett Nathan shares this message of his passing.

Art was born in the Bronx of New York City to Seigfried Albert Nathan and Pauline Steinhardt Nathan. He served our country in the Navy during the conclusion of WWII. After his discharge from the Navy, he moved to Chicago where he attended the University of Chicago. Art enjoyed cooking, and in Chicago was where he refined his culinary skills.

In the nineteen fifties, he found his home when he moved to Racine, Wisconsin. Although, he frequently traveled to Europe and Asia, his heart remained on Lake Michigan's shores and Wisconsin's Peninsula Door County. During his final five years, he enjoyed being closer to family after relocating to the greater Charlotte, North Carolina area.

He received his Juris Doctor degree from Marquette University in 1971. For over thirty-five years, he advocated with vigor for all who entered the door of Nathan Law Office. He received two decisions from the Wisconsin Supreme Court that changed criminal law practice in the State of Wisconsin.

His passions in life were the Green Bay Packers, opera, and travel. As an owner of a piece of the Pack, July would find him at the annual corporate meeting at Lambeau Field.

He and his wife, Wini, went on adventures around the world together. He found beauty in Thailand's peaceful surroundings and was able to visit there for the last time in 2020. He also enjoyed time on the water and last cruised on a riverboat on the Danube River in December 2019. He fed his passion for learning, nature and a break from his law practice during weeks at The Clearing in Door County whose board he served on for several terms.

His wife Winifred of 47 years and children Anne Nelmark, Peter (Shelley) Nathan, Angela Harris, and Raissa (Jeffrey) Urdiales will fondly remember Art for the time spent together and opportunities and dreams he helped them fulfill.

He was predeceased by his parents, his wife Stella Nathan, daughter Rhoda Nathan and son in law Rigsby Harris.

A memorial service, coordinated by past and present Rabbis, joined the Jewish communities in Charlotte and Kenosha and friends and family worldwide to honor his memory was held on September 8, 2020.

In his quest for justice Art long supported the Southern Poverty Law Center. The center is suggested for those who may wish to contribute in his memory to their work combating hate: donate.splcenter.org.

To send flowers to the family or plant a tree in memory of Arthur Nathan, please visit Tribute Store

Share Your Memory of
Arthur
Upload Your Memory View All Memories
Be the first to upload a memory!
Share A Memory
Send Flowers