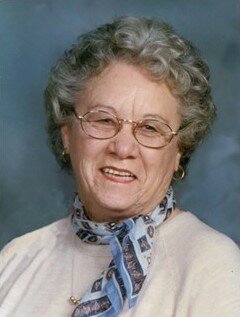 Hazel Elizabeth Huss went to her heavenly home on Thursday, April 7, 2022. She was born in Union, SC, the second of six children of Marion Eugene Sams and Ruby Lee Knox. During her early life, her family also lived in Lockhart, York, and Clover, SC. She attended Clover High School where she played on the girls' basketball team. Hazel also had an artistic side. She was often asked to sing or dance in school plays and performances. She graduated from high school in 1945. Afterwards, she attended Evans Business College in Charlotte, NC. From there, she was employed as a secretary at Mill-Power Supply Company for 5 years.

Her life soon changed after meeting the love of her life, WWII Marine veteran William H. Huss. They were married on October 4, 1947, at First Methodist Church of  Clover, SC. They would eventually have two children, a son David followed by a daughter  Patti. Hazel became a devoted mother and homemaker. She also was a Cub Scout den mother, a member  of  the  choir at St. Andrew's United Methodist Church, played on a women's bowling team, was a skilled seamstress, and gardener. Spending time at the beach with her family in the fall was an immense joy for her. She loved to surf fish.

The family would like to express their heart-felt thanks to all the family friends, neighbors, nurses, aides, physical therapists, and hospice caregiver, who were there for our mom during her last few years. God bless each and everyone. On Saturday,  May 14,2022, a memorial  service  will be held at St. Andrew's United Methodist  Church, 1901 Archdale Rd., Charlotte, NC 28210. Visitation at 1:00 p.m. followed by memorial service at 2:00 p.m.

To send flowers to the family or plant a tree in memory of Hazel Huss, please visit Tribute Store