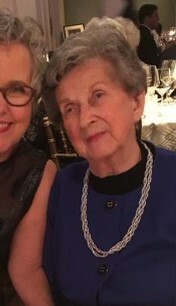 Irene Takach Whiteside, 92, of Charlotte, North Carolina, passed away Tuesday, September 7, 2021 surrounded by family. Born at home, February 16, 1929, in Forest City, Pennsylvania, she was the daughter of the late John and Helen Takach, and the oldest of seven children. She was a second generation American with a rich immigrant history. Her grandparents came to America through Ellis Island as young people. They settled into a coal-mining community, and made a life of strong faith, service and hard work. This had a lasting influence on Irene as to who she would become. As a young woman, Irene wanted to serve her country and enlisted in the United States Navy during the Korean War, becoming a Flight Orderly. She dearly loved her time in the Navy, traveling the Pacific and parts of Asia, making lasting friendships, and meeting her husband, Robert “Gene” Whiteside. They were married on base at Moffit Field, California. Afterwards they came to Gene’s hometown of Gaffney, South Carolina and later to Boone, North Carolina where Gene completed his college education. Irene became a busy mother, with four children arriving in quick succession over five years. In 1959, the family moved to Charlotte, where Irene made her home on Paisley Place for the next 57 years. There she faithfully, tirelessly - and so successfully - raised her children with firm and steadfast love, and did so alone after her divorce. When suddenly faced with the adversity of being a single Mom, she taught herself to drive, got a job as a waitress at The Open Kitchen, where she worked loyally (with little time off) for 33 years. She was determined that her children would get an education and gain skills so that “you can always take care of yourself”. Despite her twin full-time jobs as Mom and waitress, Irene still found time to be active in her church, schools, and community - serving as a election poll worker, and volunteering at her neighborhood police station. Irene’s greatest quality was to always put others - family, friends and neighbors - before herself. Her strong devotion to her Catholic faith gave her much stability, comfort and guidance throughout her life. She complained little through difficult times, and always moved quietly and gracefully forward even when losing her vision. She did miss driving and told us repeatedly!

In addition to her parents, she was preceded in death by her son-in-law, Craig Hill; grandson, Jacob Hill; sister, Dorothy Wojuzak, and three brothers: Nicholas, Danny and Joe Takach.

The family will receive friends at 10:30 am with a Funeral Mass to be held at 11:30AM on Friday, September 10, at St. Gabriel’s Catholic Church. A private graveside service will be held at Forest Lawn West Cemetery.

For family and friends unable to attend the service in person, please join us via live stream using this link: https://stgabrielchurch.org/livefunerals

The family would like to acknowledge the love and care of Patricia Ankinyemi and Terhas Goitom who provided a life line to us all.

The family strongly requests no flowers, and to instead make donations in memory of Irene to St. Jude's Children's Hospital: www.stjude.org.

To send flowers to the family or plant a tree in memory of Irene Whiteside, please visit Tribute Store
Print
Friday
10
September