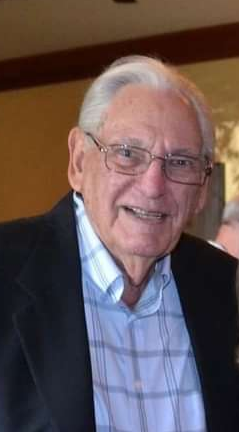 Manuel “Manny” Rosenfield, age 92, of Matthews and Charlotte, North Carolina formerly of Waban, Massachusetts passed away peacefully as a result of Covid-19 breakthrough infection, on Friday, August 27, 2021, at his home with his loving family by his side.

Manny was born on January 1, 1929, son of the late Jack Rosenfield and Jennie Karas Rosenfield.  He grew up in New York and Boston.  After graduating Bentley College in Waltham, Massachusetts, he became an accountant and later went into the furniture business taking over Lanes Furniture in Boston, Massachusetts, from his father-in-law.  In 1980, Manny was president and co-founder of Chem-Pro Corporation, a reupholstery business doing contract work in nursing homes, health insitituions, restaurants, and more. He retired in 1997, to relocate to Charlotte, North Carolina with his wife, Sallyann.

Manny met Sallyann Shifra Levine on a blind date, and for him it was love at first sight.  They married a few months later, on June 28, 1955.  For 66 years he was a devoted husband to his Sally, and she to her "Mr. Wonderful."  Manny was the proud father of Mark Rosenfield (Carrie Wagner) of New York, New York and Holly Jane Gainsboro, (Joe Machicote, and the late Steven Gainsboro), of Charlotte, North Carolina.  Manny was the adoring grandfather "Bubba" of Derek, Liana, Rachel, Austin and Foster.

Manny proudly served in the United States Air Force during the Korean conflict and was a proud Veteran who loved to share stories of his service experiences.  Manny was an ardent golfer and story teller - nobody loved his stories as much as he did as he would laugh hysterically before reaching the end of the stories.  He and Sally were longtime members of Raintree Country Club and members of Temple Beth El, Charlotte, North Carolina.

In addition to his late parents, Manny was preceded in death by his brother, Eddie Rosenfield in 1989 and his son-in-law, Steven Gainsboro in 2010.

Private graveside services were held at 11:00 a.m. on Monday, August 30, 2021 at the Hebrew Cemetery, 1801 Statesville Ave., Charlotte, North Carolina 28206 with services conducted by Rabbi Asher Knight.  Contributions in honor of Manny's memory may be made to Gainsy's Glio Blasters through the National Brain Tumor Society, 55 Chapel Street, Suite 200, Newton, Massachusetts 02458.

Share Your Memory of
Manuel
Upload Your Memory View All Memories
Be the first to upload a memory!
Share A Memory