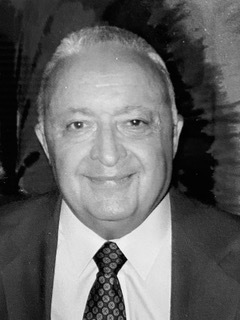 The first words Larry Lefkof uttered every morning were from the Modeh Ani, a prayer that a Jew traditionally recites upon awakening, expressing gratitude to God for another day, for returning “my soul within me.” Larry was grateful to get out of bed to follow the advice he so often dispensed: “Do as much as you can, for as many people as you can, for as long as you can, and you will be blessed.” Larry was indeed blessed. He left the world a better place.

Although he was an only child who grew up playing stick ball, baseball and football in New York City and attended DeWitt Clinton High School, Larry enjoyed summers in New Brunswick, New Jersey, on the farm of his Aunt Sadie and Uncle Bennie, playing with his cousins, Blanche, Les and Evie who were like siblings to him. He was proud of the accomplishments of an older boy he met on the farm, the artist George Segal, whose family owned a nearby poultry farm.

When Larry was about 14 he went to a friend’s house and met a girl named Flo. After walking her home to her family’s apartment in The Bronx, Larry told his best friend Joe: “That’s the girl I’m going to marry.” Larry always said that was the best decision he ever made in his life. October 2021 would have been their 70th wedding anniversary.

Larry took classes at Pace and City College of New York and then rose to the rank of corporal in the army at Ft. Hood in Killeen, Texas, during the Korean War, but instead of re-enlisting, he asked to be “demoted to civilian.” With a VA loan, bought a house in Levittown, New York, where he coached Little League.

As a food buyer for the Army and Air Force Exchange Service (AAFES) he bought food for the U.S. military worldwide, including our troops in Vietnam. When AAFES moved its headquarters from New York City to Dallas, Texas, Larry became a lifelong Cowboy fan, attending games with his daughter Caroline (“Linnie”), even on Thanksgiving Day. However, having grown up in The Bronx he still rooted for the Yankees.When he was transferred to Munich, Germany, Larry bought food for the PXs at all European bases, as well as the ingredients for the bakeries, ice-cream factory, and meat plants that supplied food for the military. He became the first food buyer from AAFES to go behind the Iron Curtain when he traveled to Romania and Yugoslavia during the Cold War, searching for new sources.

After his retirement, Larry spent the next 30 years volunteering for Jewish Family Service of Greater Dallas and Network of Community Ministries delivering bread and cakes to food pantries, senior centers and firehouses. His grandkids called his van the breadmobile because of the hundreds of pounds of loaves of bread delivered each week.

Larry’s favorite movie was Brass Target because he and his wife Flo were cast as extras in that movie. Larry’s crewcut earned him the role of a military officer rubbing shoulders with George Kennedy, who played General Patton, while Flo’s short stature earned her the role of a displaced person who stood directly in front of Sophia Loren without blocking her.

Larry often reminded his children and grandchildren that family is the most important thing and family always included close friends. From The Bronx to Levittown to North Bellmore to Oak Cliff to Munich to Richardson to Charlotte, wherever Larry and his wife lived they made life-long friends: the Ruggerios, the Bennetts, the Benums, the Werreses, the Kellers, the Martins and the Stewarts. Aside from humans, Larry loved dogs throughout his life, and his last dog Shadow will miss sitting on his lap and the table scraps.In the 1980s, Larry helped resettle the Kan family, Russian Jews, in Dallas and they became lifelong friends. When he lifted up Esther Kan’s heavy luggage at DFW Airport, he jokingly asked her, “What do you have in here, rocks?” As she was a geologist in Russia, the answer was an affirmative yes.

Larry had lots of one liners that he picked up while bussing tables as a teen in the Catskills; but the delivery of his comedic lines was set to his own internal metronome. If someone praised him he’d say, “I’m as sharp as matzah and twice as crummy.” But with a nod to Don Rickles he was also infamous for telling his daughter-in-law whenever she cooked for him, “Remember, I don’t get sick leave anymore,” and for ribbing his nephew Steven, “the Pope will get married before you” (Larry was wrong about that).

He is also survived by his nephews Steven Brown and Farley Brown, and his first cousins Blanche Frühling, Les Seidenstein and Leonard Tow.

Larry’s family would like to thank the dialysis staff of Fresenius Collin Country Dialysis Center, Fresenius Kidney Care Regal Oaks and Fresenius Kidney Care Aldersgate for their compassionate care of him, as well as all the therapists, nurses, doctors and caregivers who helped Larry live his last months with dignity. But most of all, we’d like to thank Larry’s grandson-by-marriage, Dr. Mishka Krol, a geriatric doctor whose wisdom and compassion guided us every step of the way. We are so glad he is a part of our family.

Donations in Larry's name can be made to the food pantry or local animal shelter of your choice.

Share Your Memory of
Lawrence
Upload Your Memory View All Memories
Be the first to upload a memory!
Share A Memory