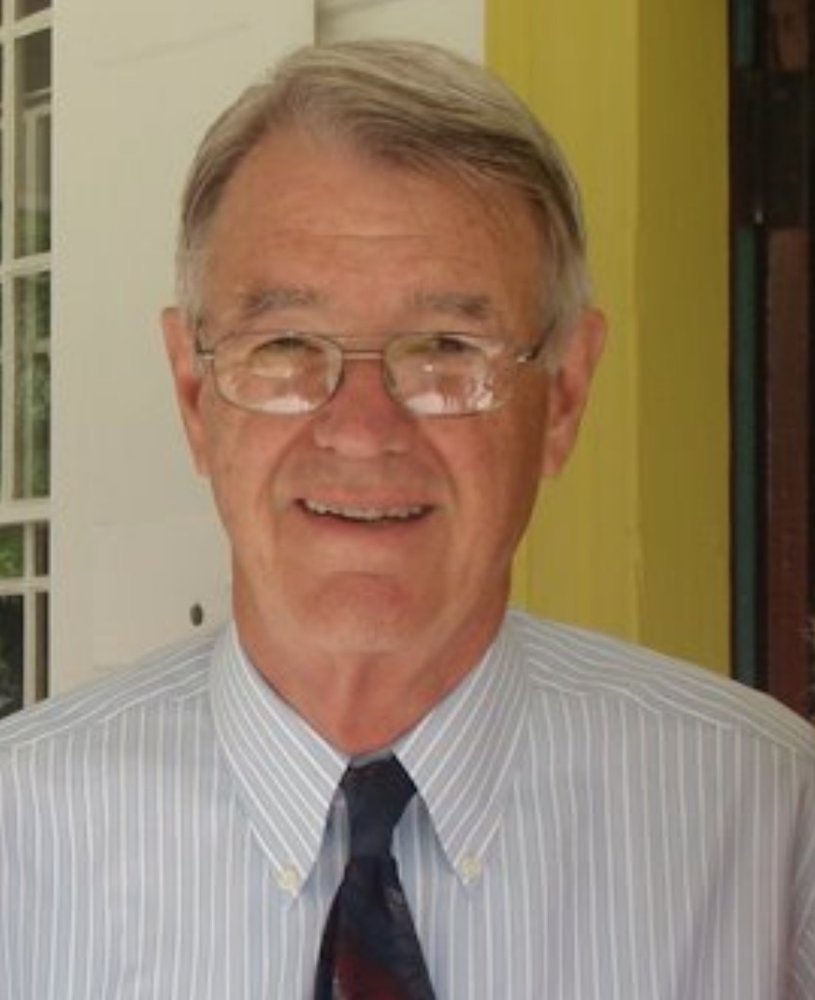 James Hermon Williams, a noted Colonial historian, author, North Carolina history expert and longtime officer of the Mecklenburg Historical Association, died on December 29th. He suffered a stroke and died at home in Charlotte; he was 81. He is survived by his daughter Scotty and sons Jimmy and Doug; his grandchildren, Cait, Cameron, Estee and Zeb; and brothers Dave and Chris. His wife of 58 years, Ann, died on February 20th after 6 years with bladder cancer.

After a career as an engineer and pioneer in computing, Jim found a second career, along with his wife Ann, as a historian; the two were known locally as “Mr. & Mrs. History” for their research, writing and first person interpretation of Colonial and Federalist local and regional history. He shared first-person tales of presidents, governors, military leaders and farmers, educating citizens, students and tourists as a part of his pursuits. Jim was tapped for his knowledge and period-accurate costumes to stand in as a model for characters in the 2000 Mel Gibson movie “The Patriot” and for The Spirit of Mecklenburg Captain James Jack statue near the Pearl Street Bridge at the Little Sugar Creek Greenway. He also portrayed William R. Davie, the 10th governor of North Carolina, delegate to the Constitutional Convention and one of the founders of the University of North Carolina for a 2020 film produced by the Daughters of the American Revolution.

Jim was born in Northfield, MN on October 3, 1939 and spent most of his youth in Worthington, Ohio. After graduation from Worthington High School in 1957, his family moved to Gainesville, FL where his father David Williams founded the Aerospace Engineering Program at the University of Florida. Jim graduated from UF in 1962 with a Bachelor of Electrical Engineering. At graduation he married Ann Jones of Gainesville, who also graduated that year.

After serving in the Army Reserves, Jim went to work for IBM in Kingston, NY; he and Ann settled in nearby Woodstock where their children were born (and where the Woodstock Festival did not take place). At IBM he designed the company’s first and second CRT display products and was granted a number of patents.

After 6 years at IBM Jim moved his family to Charlotte to accept a job with Charlotte, NC-based Lundy Electronics. At Lundy he designed and built electro-mechanical machines to process bank checks and became a leading industry expert in check processing equipment. Jim traveled throughout the US and overseas working with bankers to improve their check processing operations and implement check imaging solutions.

In 1975 Jim took a position with Recognition Equipment as New Product Development Manager and moved his family to Dallas, TX.

However, his talents were a loss for Lundy, which lured him back to Charlotte to run both the check processing (MICR) and Optical Character Recognition (OCR) products. In 1992 Lundy, then a division of TransTechnology Corp., was bought by Recognition and Jim’s focus shifted to overseas markets.

For the next six years Jim traveled around the world meeting with major banks and central bankers explaining and demonstrating how their operations would change as they adopted check imaging. He loved international travel and learning local culture; his business host in South Africa took him on a safari where the Jeep they were riding in was charged by a mother elephant. He learned the delights of Middle Eastern and Asian foods, he learned his way around the London Underground and the Paris Metro and and he experienced the local business “customs” of a customer in Italy. After a machine that the customer purchased malfunctioned the man promised to murder him if the project was not successful. Jim led a team of engineers to Florence, Italy and spent several months fixing the problems.

When Recognition was bought by their major competitor, Jim returned to IBM, selling check imaging systems in the Southeastern US. After three years his former boss hired him to represent Unisys to foreign customers. This began with a project in Hong Kong, where he helped introduce a new product that captured check images at the teller station, the first such technology in the world. This job again had him traveling all over the world, all working in 33 countries.

In 2005 Jim retired from Unisys when his job was off-shored to India. In his spare time Jim had enjoyed mountain climbing and backpacking in the Carolina mountains, trout fishing (he tied his own flies) and Revolutionary War reenacting as Fife Major of the 6th NC Continental Line, which he did with his wife Ann, becoming an expert on Military Musick of the 18th century.

In retirement Jim joined Ann in her historical pursuits, shifting his focus to the history of the colonial and early federal period in Mecklenburg County and North Carolina and to supporting local historic sites. He served as the Secretary-Treasurer for the Mecklenburg Historical Association, managing a weekly email of upcoming events at local historic sites to a list of over 1,600 people. He and Ann wrote and edited The Dandelion, the newsletter of the MHA Docents.

Jim served on the boards of Latta Plantation and Historic Rosedale where he served as co-president. Jim and Ann appeared often at local historic sites and before civic organizations in First Person Interpretation of historic characters. Jim also demonstrated the colonial craft of bookbinding which he reconstructed and interpreted from historic sources.

In studying the early history of Mecklenburg, Jim exhaustively examined the early records and wrote profiles on many of the early settlers which today provides a guide for interpretation of local historic sites, trails and walkways. In 2012 Jim and Ann researched and wrote a history of the family of Major John Davidson of Rural Hill, funded by the Arts and Science Council, and presented their findings at a number of venues including the national convention of ALHFAM in 2013. Later they published this research as The Davidson Family of Rural Hill, North Carolina, which was published by McFarland Books in January 2020.

On 20 February, 2020 Ann died after a six-year adventure with bladder cancer.  During the COVID-19 epidemic Jim continued the weekly emails, and in place of a calendar of local events, shared short history lessons each week. These proved so popular that they sparked conversations, lengthy email discussions and guest posts.

A memorial service will be held at the Hankins and Whittington Funeral Home on Saturday, January 2nd at 2PM and on line at Jim Williams. The family requests that attendees of the memorial adhere to Covid safety protocols including social distancing, wearing a mask and not attending if any symptoms of a cough or cold are present. Jim will be interred with Ann in their plot at Charlotte’s historic Elmwood Cemetery.

Memorial gifts can be made to the historic site of the donor’s choice.

To send flowers to the family or plant a tree in memory of James Williams, please visit Tribute Store