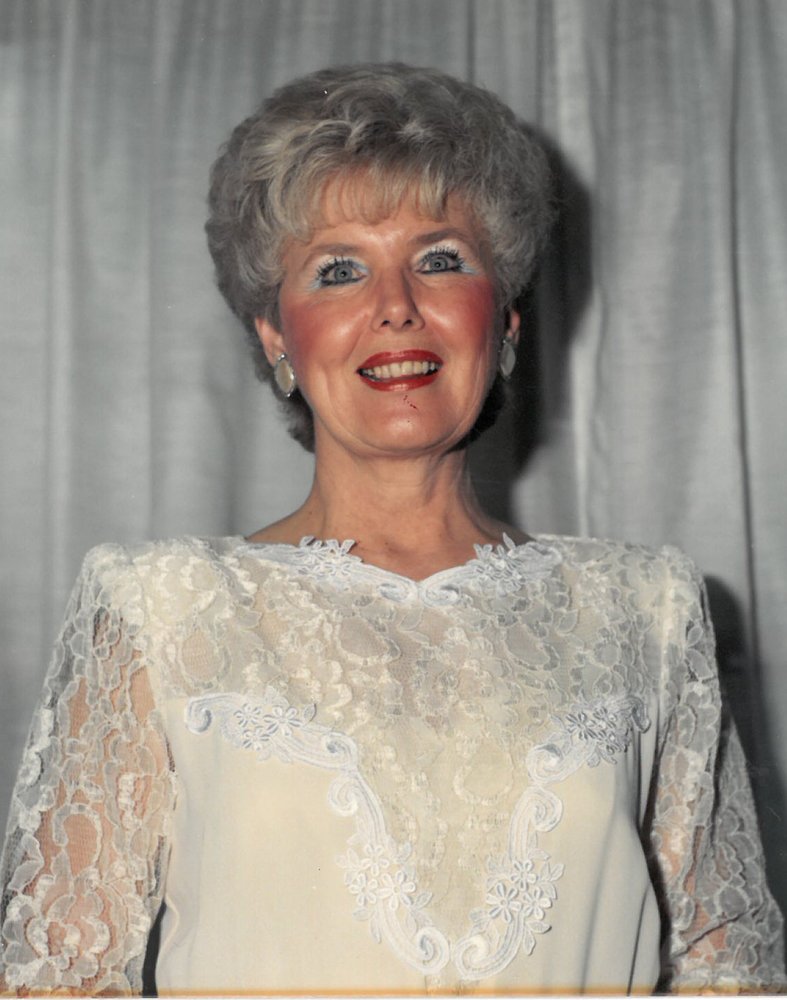 Marjorie Marie Moore Elliott Smith was called to a greater purpose in the early morning hours of July 25, 2020.  She was born at home on November 29, 1933 in the mountains of North Carolina, the eldest of 8 siblings.  The kindest of the lot, she became a second mother to her brothers and sister, teaching them life skills and the importance of looking after one another.  She would hike to her Aunt Mabel’s house to fetch fresh produce from the summer garden and canned vegetables in the winter.  She pailed water for the house, made dinner most nights, and split wood for heat. Encouraged by cousin Helen, she went on a blind date with EA Elliott who was quoted as saying, “An angel has fallen from Heaven.”  Although cheesy and cliché, she agreed to another date and an eventual marriage.

Marjorie and EA birthed and raised two fierce and proud women, Sharon and Debbie.  Marjorie taught her daughters as she had taught her brothers and sister. They learned to make a meal from nothing, garden and harvest produce, sew, collect eggs from chickens, and show kindness, even when it was difficult.  Marjorie also taught the girls other life lessons like how to not use perm cream at home (Sharon and Debbie often looked like troll babies) and how to properly broom a rooster (Marjorie saved Debbie from an epic rooster attack after she chased the fellow, he returned the favor, and then she became trapped in the utility closet). At work, Marjorie often received calls from home from the young sisters tattle-taleing about who had done what.  The most memorable call coming from Debbie that Sharon was chasing her with scissors threatening a pixie cut, ages 5 and 6. For the next several decades, EA would love her faithfully and unconditionally until his untimely death in 1980.

Marjorie would carry on with work and life and would become a grandmother of 4 (Chris, Haley, Logan, and Emily).  Although she had such amazing humans in her life, Marjorie felt as though she needed something more.  She began to take dance classes at a “Parents Without Partners” group where she learned to tango, ballroom, and foxtrot.  One Saturday, she took a break from dancing and was approached by a man named JD Smith.  He asked for the next dance and selfishly would not allow any other men to cut in (Marjorie went to the bathroom and JD told them she was taken).  They would continue to dance and later marry in 1991.  Marjorie and JD agreed on nearly everything except the number of doors a car should have (Marjorie enjoyed coupes, JD enjoyed not “crawling his ass back there”), the appropriate gifts for the grandchildren (Marjorie enjoyed practical gifts like sweaters and socks, JD preferred bags of candy and chocolate), and the silly songs to teach the younger grandchildren (Marjorie sang Mother Goose, JD sang the “You’re So Ugly” song, lyrics are below).  Nonetheless, you never saw one without the other.  They retired together (her from McDevitt and Street, he from AT&T), became grandparents together (the last of the bunch, Kylie, born in 2004), and piddled around the house together as old folks do.  Marjorie and JD would happily spend 29 years together in Charlotte, eventually moving to Aldersgate Assisted Living as Marjorie’s Alzheimer’s condition worsened.  JD would continue to love and care for Marjorie, continue to tuck her in bed every night, and continue to place her needs above his own until his death 3 weeks ago.

Marjorie’s Alzheimer’s persisted, but we all know she truly missed JD.  Early Saturday morning, Marjorie accepted the offer of a lifetime.  Although we miss her deeply, we are thrilled she accepted. She will be remembered for a cool pair of sunglasses, singing in the car, lipstick, and the grace she exuded. She is reunited with JD and EA, brothers, parents, her daughter, and countless family and friends, laughing, elegant, and poised as ever, finally able to remember where she put her pocketbook.

In addition to her parents, she was preceded in death by brothers Edward and Austin.  In addition to her daughter she is survived by her brothers Frank (Jo Ann), Jim (Mary Ann), Guy (Donna), Paul (Laura); sister Doris (Steve); step son Jeff (Laura); sister-in-laws Tina and Mildred; great grandchildren Gabriel Smith, Quinn Smith, Allie Barker, Chloe Barker, Cohen Hord, Kylie Smith; many nieces and nephews along with many friends.

You’re so ugly, oh so ugly, you’re some ugly child.

Oh how I hate you, you alligator bait you,

Why don’t you lay down and die?

There’s a curse in your family and it fell on you.

You’re so ugly, oh so ugly, you’re some ugly child.

To send flowers to the family or plant a tree in memory of Marjorie Moore Elliott Smith, please visit Tribute Store
Wednesday
29
July

Share Your Memory of
Marjorie
Upload Your Memory View All Memories
Be the first to upload a memory!
Share A Memory
Send Flowers