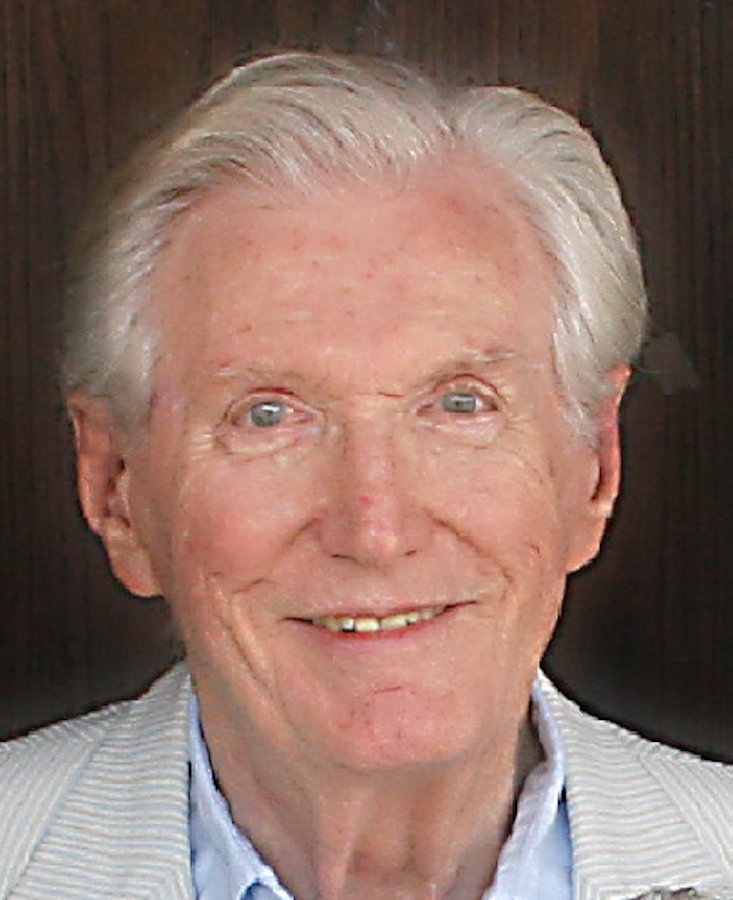 John William “Bill” Quinn was a pioneer in the early years of television; an engineer with the heart and pen of a poet; a smart, savvy marketer; and quiet, proud veteran of WWII. Bill passed away peacefully at home, family by his side, on April 22, 2020 at the age of 98. Bill was a husband, father, grandfather and great-grandfather who lived for personal and virtual visits from his entire family in the Carolinas and around the country. Bill’s beloved wife, Emma, predeceased him in December 2019.

Bill was the stereotypical stoic New Englander, born September 21, 1921 in Pittsfield, MA, the eldest of three brothers. Bill had a dry wit: he loved telling his amazed Carolina children that he walked to school through 3-feet of snow, uphill both ways. With his fedora and eyeglasses, his children’s friends believed he was actually Clark Kent…and Superman.

Bill attended Holy Cross on a full scholarship, pre-med. After Pearl Harbor during his final year, he immediately enlisted and went to war. Holy Cross conferred his degree while he was fighting on the battlefields of Germany. After four brutal years, mostly with the 81st Chemical Mortar Battalion, Bill’s jeep was hit on the very last day of the war. Bill spent the next 18 months in Army hospitals overseas and in the US. Bill later chronicled his Army years in a series of engaging, poignant and yet somehow hilarious memoirs beginning with “Bill Quinn’s War”.

The GI bill brought him to Charlotte where he followed his dream into radio. WBT was just launching the “new-fangled fad” of television called WBT-TV. Bill, ever the visionary, made the move to this new medium. As the station’s first Program Director, he created and set policies that are still in use today. It was there that Bill also met and fell in love with his wife of almost 70 years, Emma.

Bill then became WBTW’s first Station Manager in Florence, SC. The family returned to Charlotte where Bill became Marketing Director at the Bouligny Company until he retired. Bill discovered he was too energetic to remain retired and created “Quinn Business Services” with Emma. They were association managers for NARI and the Metrolina World Trade Association. Neither fully retired until their mid-80’s.

Bill was a quiet, dignified man: the personification of a gentleman who shouldered responsibility without complaint. He was extremely proud of his deep Irish heritage. He was an active scholar, researching the politics and battles of the War Between the States with the Civil War Round Table. They honored him for his Purple Heart combat service and for preserving the history of Charlotte. Bill’s continued efforts with the Boy Scouts of America earned him national recognition.

A devout Catholic, he thanked God at every meal praying it would be the best day of his life. Bill and Emma taught their four children the value of hard work, education, optimism and family.

A private burial was held at Sharon Memorial Gardens. A memorial to celebrate Bill’s life is being planned for the Fall.

To send flowers to the family or plant a tree in memory of J. Quinn, please visit Tribute Store
Print
Share A Memory
Send Flowers