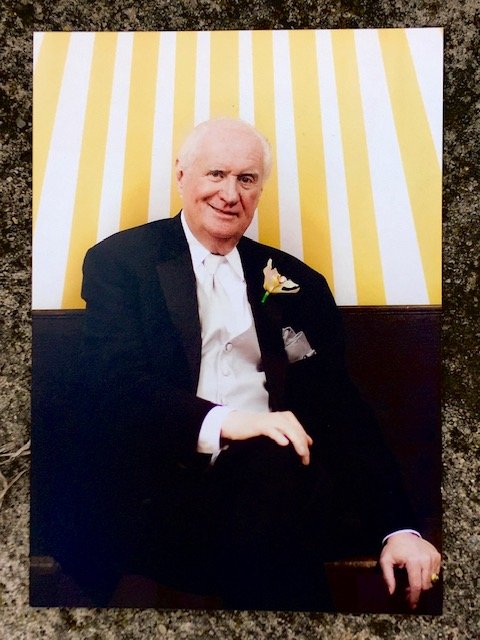 John was born on March 1, 1932 in Hoboken, New Jersey.  He was the first in his family to attend college, graduating from St. Peter’s University, a private Jesuit college in New Jersey.  John attended college on an ROTC scholarship, enlisted in the Army during the Korean War, and later served as a Second Lieutenant in the Army Reserves.  He married Erna Gärtner of Schlüsctern, Germany in 1967 and together they had one son, John Josef Nickerson of Charlotte N.C.  John and Erna divorced but remained friends throughout the years.

After completing his reserve service, John had a distinguished business career, retiring from Phillips Fibers in Greenville SC as Director of Advertising after more than 25 years with the company.  He was passionate about reading, discussing politicians (and their many personal shortcomings), attending performances by the Greenville Symphony, and cheering on his beloved Fighting Irish of Notre Dame.  John was happiest, however, when he was shooting the breeze with his son.

John was preceded in death by his mother, Cecelia (Hoskins) Nickerson and his sister, Aileen McCauley of Hoboken N.J.  He is survived by his son, John Josef, his daughter-in-law, Valecia (McDowell), and granddaughter, Josephine, of Charlotte NC, as well as his niece and goddaughter, Sheila Corvino and her husband Michael, of Dorset Vermont and his niece Aileen Kopels and husband Nathan of Gilboa, Israel.

A visitation will be held on Saturday, February 15, 2020 at Hankins & Whittington at 1111 East Blvd, Charlotte N.C. from 6-8pm.  A funeral mass will be held at the same location on Sunday, February 16, 2020 at 11am. In lieu of flowers, please make a donation to the General Scholarship Fund of St. Peter’s University, Jersey City, New Jersey in John’s name to honor his lifelong love of learning.

To send flowers to the family or plant a tree in memory of John Nickerson, please visit Tribute Store
Saturday
15
February

Share Your Memory of
John
Upload Your Memory View All Memories
Be the first to upload a memory!
Share A Memory
Send Flowers