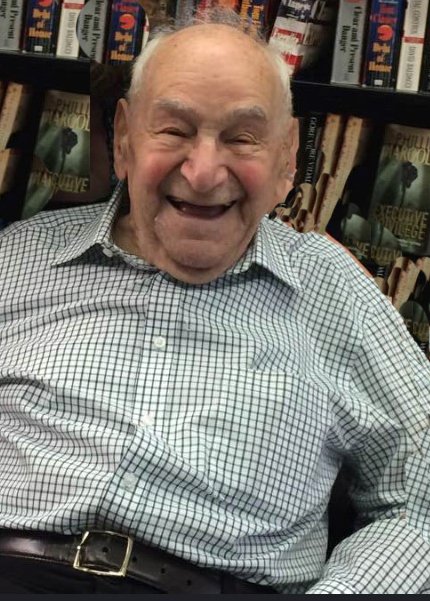 Henry Hirschmann, age 99, a resident of Charlotte since 1968 and a living here for over 50 years, passed away peacefully in his sleep on Thursday, October 17, 2019, at his late residence.

He was the beloved son of Mair Hirschmann and Ida Hahn Hirschmann. Henry was born in Grosse-Auheim, Germany in 1920, and was captured and imprisoned by the Nazi's for being Jewish. Even after being a Holocaust surviver, he left Germany and came to the United States, he joined the U.S. Army and went back to Germany to fight with American Forces against Hitler in WWII. Henry received many service award medals including one for rifle marksmanship, and most especially the Purple Heart for being wounded in action. After the war Henry was a salesperson in Giftwares and Housewares.

Henry is survived by his two children, Adina Hirschmann Leach and her husband Gerald Leach of Washington, DC, and his son Paul M. Hirschmann and his wife June Allen Hirschmann of Charlotte, NC. He is the adoring "Opa" to his five grandchildren, Lyndsay Leach, Ilana Hirschmann, Abbey Leach, and Hanna Hirschmann, and Matthew Allen and his wife Megan, and two greatgranddaughters, Maggie and Madeline Allen.

In addition to his late parents, Henry was preceded in death by his beloved wife, of 48 happily married years, Blanche Weinstein Hirschmann, who passed away on January 19, 2008; his two brothers, Paul Hirschmann and Lothat Hirschmann, who both died in 1939.

Funeral Services will be held 2:30 pm Sunday, October 20, 2019 in the main sanctuary of Temple Israel Synagogue, 4901 Providence Road, Charlotte, NC  28226 with Rabbi Howard Siegel, Cantor Shira Lisik and Cantor Elias Roochvarg. An interment service is to follow at the Hebrew Cemetery, 1801 Statesville Road, Charlotte, NC  28206, where military honors will be bestowed on Henry.

Contributions in honor and memory of Henry may be made to the United States Holocaust Memorial Museum, 100 Raoul Wallenberg Place SW, Washington, DC  20024-2146.