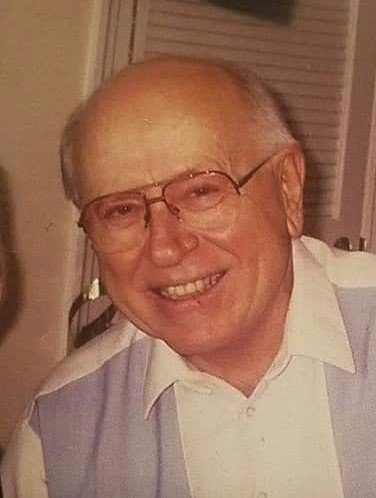 William Anthony Hollenbach, a dedicated husband, father and life-long resident of NC, died on June 17, 2019 at the age of 87 at the Cypress of Charlotte.

Bill was born in North St. Louis, MO on December 14, 1931 to William Anthony Hollenbach and Adelaide Moslanka. He graduated from the University of Missouri in 1956 with a degree in Business Accounting and worked as Certified Public Accountant for Price Waterhouse. He then moved on to a successful career at Cato Corporation and then onto owning his own women’s apparel retail chain called “A Touch of Class” with his partner Joan Hester. He met his wife during the Korean War where she worked at Tripler Army Medical Center on the “Big Island”, Hawaii while he was an enlisted meteorologist in the Navy and she a nurse officer in the Army.  On September 19, 1953, he married Rosmarie Danihel, a nurse in the polio ward in Milwaukee, WI. They were blessed with a large family of 7 children, 10 grandchildren and 7 great grandchildren.

Bill was a devoted father and husband, a great businessman and student of business, economics, history, religion, poetry, and art. During his business career, Bill traveled the world extensively – Europe, Japan, China and all of North America. As he aged, he enjoyed more peaceful times reading, writing poetry, listening to music, learning about history and religion and playing cards. He was always an individual who had an inquisitive mind and a positive attitude. After major heart surgery 22 years ago at Moses Cone Hospital in Greensboro, Bill became more spiritual and attended church services with his wife and daughter at St. Vincent’s and St. Gabriel’s in Charlotte, NC. He has donated his body to UNC Chapel Hill’s medical center.  He will be deeply missed by his friends, family, and all who knew him.

Due to his decision to donate his body to science, a memorial service will be held at 10:30 a.m. Saturday, June 19, in the chapel of Hankins and Whittington Funeral Service.

In lieu of flowers or cards, donations in his memory may be made to Hospice and Palliative Care of Charlotte at https://hpccr.thankyou4caring.org or 7600 Little Avenue, Charlotte, NC  28277 who provided wonderful comfort care in his remaining days.

To send flowers to the family or plant a tree in memory of William Hollenbach, Jr., please visit Tribute Store
Saturday
19
June