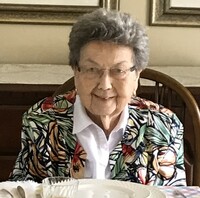 Adriana J. Pearson, 96, of Charlotte, North Carolina, passed away Monday, May 23, 2022. Born June 10, 1925, in Chicago, Illinois, she was the daughter of the late John and Marie Verhoeven Van Keulen. Adriana is survived by her children: Eugene Pearson (Paula, deceased) of Heath Springs, SC; Corrine Glenn (Jerry) of Waxhaw, NC; Kathleen Kiplinger (Chuck) of Kalamazoo, MI; Tim Pearson (Lindy) of Bonney Lake, WA; Christine Pearson of Charlotte, NC; Carolyn Sullivan (Mike) of Roanoke, VA; Warren Pearson (Nicole) of Grants Pass, OR; Philip Pearson of Chicago, IL; John Pearson (Candy) of Selma, OR; her sister Helen Bouchard of Chicago, IL, sister(-in-law) Madelaine Adair, Huntertown, IN; 17 grandchildren; 21 great grandchildren; one great-great grandchild and countless nieces and nephews. In addition to her parents, John and Marie, she was preceded in death by her brothers Adrian, Johnny, Billy; sisters Marie, Theresa, Anna, Patsy and Dorothy; her husband, Warren Eugene Pearson; sons: Richard and Donald Pearson (Janet); grandchildren Matthew Glenn, Jennifer Pearson and Emma Pearson. A Funeral Mass will be held at 2pm ET on Friday June 3, at St. Peter Catholic Church, 507 S Tryon Street Charlotte. In lieu of flowers, the family requests that remembrances be made in the form of contributions to St. Peter Catholic Church or Hospice & Palliative Care of Charlotte, PO Box 470408 Charlotte 28247. Adriana will be buried on her birthday next to her husband Warren at Hilcrest Cemetery in Grants Pass, Or. Adriana was born on June 10, 1925 in Chicago, and grew up on the city’s south side. She was a first generation American, the third child and first daughter of John and Marie Van Keulen, and one of ten children, born of Dutch immigrants. (John was from Rotterdam and Marie was from Nijmegen.) Adriana would gain from them a deep faith, love of family, strong work ethic, and sense of gratitude — in even the toughest times. She was resilient and courageous as her mother Marie, who left her family in 1919, set off by sea to marry a man she had not seen in four years. The family was poor, and Adriana was shaped by the struggles she faced, knowing that God accompanied her through every trial. Her family would live their childhoods within walking distance of Our Lady of Sorrows Cathedral — moving from Van Buren to Polk to Jackson Boulevard, back to West Polk and then to Albany. At 3 years old, Adriana, her mother and 3 siblings contracted scarlet fever and were quarantined in the County hospital. At 4, after her brother Billy was born, her mother went back into the hospital and Adrian, Johnny, Adriana and Marie were placed in St. Joseph’s Home for the Friendless, a Catholic orphanage. Not long after they returned home Theresa was born, then Anna, Helen, and finally in 1934, identical twins, Patsy and Dorothy. In September of 1935, Adriana’s mother suffered a stroke that left her half paralyzed and was kept in County Hospital for an entire year. At 10, Adriana stayed home from school to take care of the family. The twins were made wards of the state and put into a foster home, the next three little ones sent to a relative of the parish priest, and Adriana kept the home running smoothly. And she was double promoted, keeping up with her class. She would end up as its Salutatorian. When the Depression caused her father to lose his egg candling business, Adriana took up his egg route, pulling 30-60 dozen eggs on a wagon through the city streets at 11 years old. She adored her Papa. In 1941, the twins returned home, and 3 years later Adriana married Warren Eugene Pearson, a sign painter, just home from the War after serving in the South Pacific. She was 18 and he was 24. Nine months later, Adriana gave birth to triplets, making her the youngest mother of triplets in the United States. Her story was featured in Life Magazine and profiled in the magazine section of the Chicago Tribune. While Warren built a business of his own, Adriana found new ways to multiply loaves and fishes. She became an expert shopper, bread maker, chef, seamstress, homemaker. Meanwhile she was keeping books for Warren’s business and continued returning home to her parents to clean each week. Self-employed, Warren with Adriana raised 11 children, endured the heartbreak loss of their son Richard at just 4 months old, and created a home where every child believed they were the favorite. Adriana was a master storyteller, incredible harmonizer with Warren, baker, wallpaper hanger, self-taught, child psychologist and creative spirit. She was a quick thinker and great improvisor. She served the church on the Women’s Guild, sang in a choir. Later, after moving to Grants Pass Oregon, taught young women parenting skills, became a Third Order Servite, and practiced a special devotion to Mary. Adriana cared for her mother for 30 years and opened her home to several nieces and nephews for an extended period of time. In addition to being a full-time homemaker, she worked at Creighton’s butcher shop, made salads for the Milk Pail restaurant, and packed craft kits and filled orders at Lee Wards. When the children were all in school, she took jobs cleaning houses. Faith and family formed the center of her life. Her mantras: Trust God, Do unto others as you’d have them do unto you, Accept even little trials. God is in control. She was beloved and loved everyone. Her last words were, “thank you”.