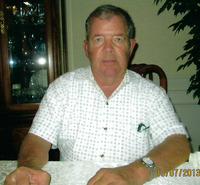 James (Jim) Gary Jeffries of Winston-Salem, NC died May 15, 2022, after a short illness. Born October 15, 1952, in Charlotte, NC, he was the son of the late James Warren Jeffries and Marguerite Caddell Jeffries of Charlotte. He was also preceded in death by his sister Nancy Jeffries Fennell. Jim is survived by his twin brother David Jeffries (Debbie) of Winston-Salem, niece Tara Jeffries of Greensboro, niece Jennifer Vogler (Wade Hill), great-niece Dasia Hill, great-nephew Cypress Hill all of Winston-Salem, and brother-in-law Louis Fennell of Concord as well as numerous relatives and friends. Jim graduated from Myers Park High School in Charlotte. After graduation he worked for Duke Energy Corporation for 45 years before retiring in 2019. Jim, also known as Hoot to coworkers, worked in several positions at Duke Energy making many lifetime friends. He was a lifetime member of Calvary United Methodist Church in Charlotte attending even after moving to Greensboro and later to Winston-Salem. Jim participated in many charity walks to raise money for special causes. He loved visiting and calling friends and family. He also enjoyed watching old western movies and college sports, especially the women’s games. He was fortunate to travel with his family and friends to 49 states and several foreign countries including a mission trip to Costa Rica. Jim had a passion for helping others by donating blood. As a child Jim needed blood during a medical procedure and a family friend donated to help. This gesture of kindness made a lifetime impression on Jim. He donated blood 254 times. He was recognized by the Red Cross on many occasions for his donation record. A celebration of life will be held on Thursday, May 26, 2022, at Calvary United Methodist Church, 512 West Blvd, Charlotte, NC. Visitation will be at 1:00 pm preceding the service at 2:00 pm followed by burial at Forest Lawn West Cemetery in Charlotte. In lieu of flowers, please consider donating blood in honor of James or donating to Calvary United Methodist Church or a charity of your choosing.