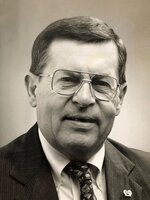 Bo was born in Charlotte at Mercy Hospital to the late Edgar and Eloise Rochester.  He graduated from the old Central High school in 1955.  From there he went into the United States Air Force and served his country.  Bo went on to work for Charlotte Van & Storage, a local moving company, until he retired for a second and final time in 2001.

Bo never met a stranger.  He loved talking to everyone and anyone about anything.  If he didn't know you he soon would.  His greatest joy was his family. He was proud of every one of them.  Bo was a friend of Bill W for 43 years. He spent many hours on Zoom meetings with friends in this fellowship.

He was a lifelong Atlanta Braves and Carolina Panthers fan.  He was super excited to see Atlanta win the 2021 World Series.  He and Beverly were inaugural Carolina Panthers PSL season ticket owners.  They never missed a game in person if they were able to make it.

In lieu of flowers please make donations to St. John’s Episcopal Church or to the Zoar Road AA Club in care of Beverly Rochester.