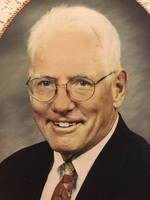 Frederick (“Fred”) Gibbs passed away on January 4, 2022, at 89 years of age after a brief illness unrelated to the pandemic. Fred was born March 22, 1932 to Walter and Elizabeth Gibbs. He is survived by his three adopted children Michael, Matthew, and Robyn, along with his three grandchildren Mary, Sophie, and Elizabeth (Ellie), shared with Janice Gibbs. Fred was also the proud “American father” to Andrew, Marla and Jennifer Lopez. He is pre-deceased by his loving companion in later years Patricia Ann Metoyer. Fred graduated from Alfred University and served proudly in the U.S. Marine Corps. He then went on to build a brilliant career in telecommunications and international business. During this, the first chapter of his professional journey, he served in several prestigious executive roles, most notable as CEO of the ITT subsidiary Standard Electrica, a thriving national telecommunications company based in Rio de Janeiro, Brazil. Chapter two saw Fred retiring early in the glow of his business prowess to become a gentleman farmer in Pemberton, New Jersey. While his Jersey corn and tomatoes were a hit at the local grocery… Fred couldn’t resist the temptation to embark on his third and final chapter, and after studying law at Rutgers University he founded the firm Gibbs & Gregory in 1993. Fred enjoyed a prolific third career as an attorney and as the firm leader he mentored five young attorneys alongside his law partner and dear friend Stan Gregory. Fred was a meticulous gardener, a fearless sailor, a seasoned world traveler, and a careful study of world history. He was also a committed member of his many communities, as a Board member of Alfred University, prior Councilman in Barnegat Light, NJ, and active Rotarian in Millsboro, DE. Despite these many accomplishments, Fred had no time or interest in fame or self-promotion. Instead, he devoted his limitless energy, passion for life, and wisdom to supporting and loving his family, and his many, many, many special friends. With his many years and experiences, it is no wonder that Fred never missed the opportunity to engage in rich conversation and debate. Politics, the latest news, or the chronology of human civilization… no topic was ever off limits! So, when you finally have your chance to meet Fred Gibbs in heaven, be sure to pull up a chair for a while… Feel free to leave the family your condolences via the Tribute Wall provided.