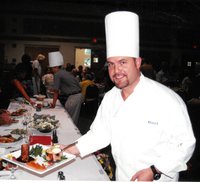 He was a native of Charlotte,graduating from Saint Patricks School and Catholic High School. He attended UNCC to study computers. He eventually attended the French Culinary School in New York City to follow his dream of being a Chef. He graduated December 19, 2003 accomplishing his dream to be a Chef. He loved cooking and gorgeous  presentations of food so being a Chef was a beautiful triumph in his life.

A private family service will be held Saturday, August 08, 2020.  A celebration of Barry's life will be held at a later date at St, Luke’s Lutheran Church to be announced.